Tallahassee, FL – Hopes were high heading into this season in Tallahassee, as the FSU program seemed poised to head back to their second National Championship Game in 4 seasons. Just days after Florida State won the 2042 National Championship, their prized recruit for the 2043 season went undrafted. Pat Vander Laan, PVL for short, was going to be a superstar in the eyes of the coaching staff.

As a freshman in 2043, Vander Laan hit .360/.464/.697 with 17 home runs and more walks than strikeouts in 50 games, carrying another dominant Florida State team to their second consecutive Freedom Conference Championship.

In his sophomore 2044 campaign, the 6’0, 185-pound kid from Queens, NY was even more impressive. He hit an even better .422/.487/.680, but he hit just 9 home runs in 50 games and struck out twice as often as he walked. Florida State wasn’t quite as good as years past, despite Vander Laan’s excellence, going 28-22.  Expectations were sky high, though, heading into this season.

PVL was seen as a potential #1 overall pick, with his only real questions coming on the defensive side of the ball. But most scouts were in agreement that he had good enough feet to be at least an average third baseman long-term.

Unfortunately, both PVL and Florida State have failed to live up to expectations. FSU is an abysmal 13-36, sitting in dead last in their conference as of April 25. Vander Laan hit just .271/.377/.492 in his first 16 games, with 3 home runs. Then he ruptured his Achillies tendon jogging into second base after hitting a double, and just like that his season was over.

Scouts remain high on PVL’s long-term potential, and injury experts think the injury is only a 3-4 month recovery rather than the usual 9-12 month time frame. But his offensive struggles this season raise some concerns, as his power continues to decline. The lack of improvement is alarming, and now he’ll miss the final 35 games of his final collegiate season. 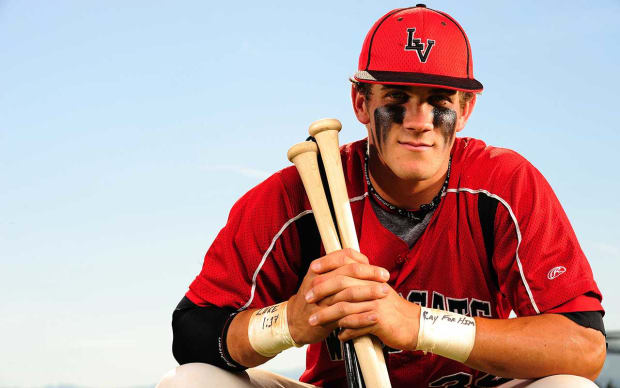 Following the 2043 season, in which the NFHSA posted a league-wide ERA of 2.60, league officials decided to change the ball to bring some more offense back to the game. Unfortunately, something went terribly wrong with the tweaks to the ball, and the league-wide ERA went from 2.60 to 10.25 in one season. No, that’s not a typo. The average (earned) runs per game PER TEAM in the 2044 high school season was just over 10.

The league, understandably panicked, went back to the 2043 balls this season, and the league ERAs are once again near the 2043 levels, currently sitting a 2.98 for the season across both leagues. That 2044 season will remain the largest outlier in league history. The NFHSA league commissioner? 86-year-old Rob Manfred.

At 6’4, 200 pounds, Puddy’s power is something scouts dream on. He has more time to fill out and get stronger, and he has decent range in the outfield for someone so large. Some scouts feel he’s a bit selfish, but that can change as he matures. The only other red flag for Puddy is his girlfriend, Elaine. They have a dysfunctional relationship that seems it will cause problems over time.

Puddy is likely a lock to be a top 5 pick in this June’s draft, and some teams have him atop their boards. He’s certainly a player to watch closely over the next few years, wherever he ends up.

PVL is on my radar, but my scout and I prefer Puddy’s game more. I’m sure someone will take a gamble at PVL at some point in the 1st round. He might not end up being the #1 overall pick, but I can still see him getting selected in early first round.

Yeah I like Puddy more too, PVL is more developed and plays a harder to fill position but I like Puddy’s overall potential more for sure.