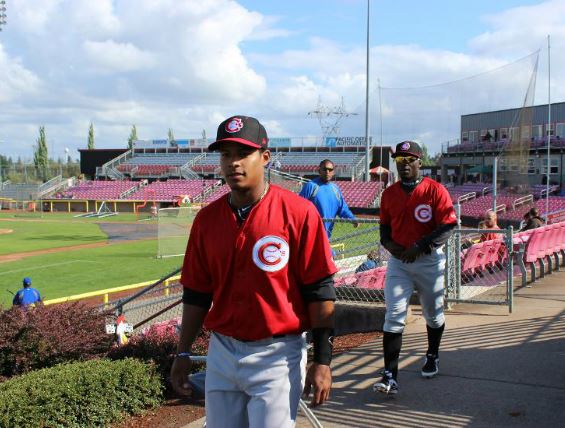 The Vancouver Canadians are surprising many people 1/4 into the new implemented 162 game season. Many people around baseball had them to end up last in the division despite some big off season acquisitions and huge leaps from their young prospects who had a taste of the big leagues and excelled. Canadians GM Dan Courcelles never gave in to belief that his team was going to have another mediocre or sub par year. He was a believer from the beginning and even with question marks on the team, he believed that his team could be a contender this year. Currently at 22-16, only 4 1/2 games behind the division leading Millers, the Canadians have the second best record in the Frontier League and lead the wildcard spot by 4 games.

To show how well they’ve played compared to the rest of the division, they are actually 5 games ahead of the other division leader. Pretty good for a team everyone thought was going to be at the basement of their division this year. Yes I know that there is plenty of season left to go. Last year, the Canadians actually had a commanding lead in the wildcard spot and challenged for the division title but ran out of gas and got plagued by injuries to key players which led them to a terrible July with no way of recovering. This year things are different. They have solid pitching which actually leads the Frontier League in every pitching category except Homeruns Allowed (2nd) and their offence is scoring runs at key moments even though they aren’t producing many runs in total. Along with this, another reason they could make it to the playoffs and contend this is year is the lack of talent and bad play of other teams. Many teams in the FL are struggling in the first 1/4 of the season and the Canadians are in a perfect spot to take advantage of that and grab a commanding league going into the All Star break.

Let’s have a look at some player and team stats from the Canadians season so far. Some might surprise you.

2nd in Homeruns despite being in the lower half in most batting stats (Hits coming at key moments and usually are homeruns, aka Barnhart 2 game tying and game winning HRs vs. San Diego on May 16th)

5-0 in extra inning games (Once again, hitting and pitching in key moments)

Fernandez, Norris and Hoffman Top 3 of 4 in Ks in FL

As you can see, the Canadians have many things to highlight so far this season. They have surprised many people in the league so far and many teams who thought they might be an easy team to face. They’ve become a team to fear when going to play them at home, and also when they come into town to face the home team. Hitters definitely do not want to face their historically dominating pitching staff and bullpen. If they keep it up all year, they might go down as one of the best pitching staffs in CBL history to date. Many people will be watching and seeing if this team can keep it up and make the playoffs, and maybe even be a contender for the championship. If they keep it up, I’d say they are definitely in it to go to the CBL Finals. We’ll just have to wait and see what happens. There’s still lots of season left to play!