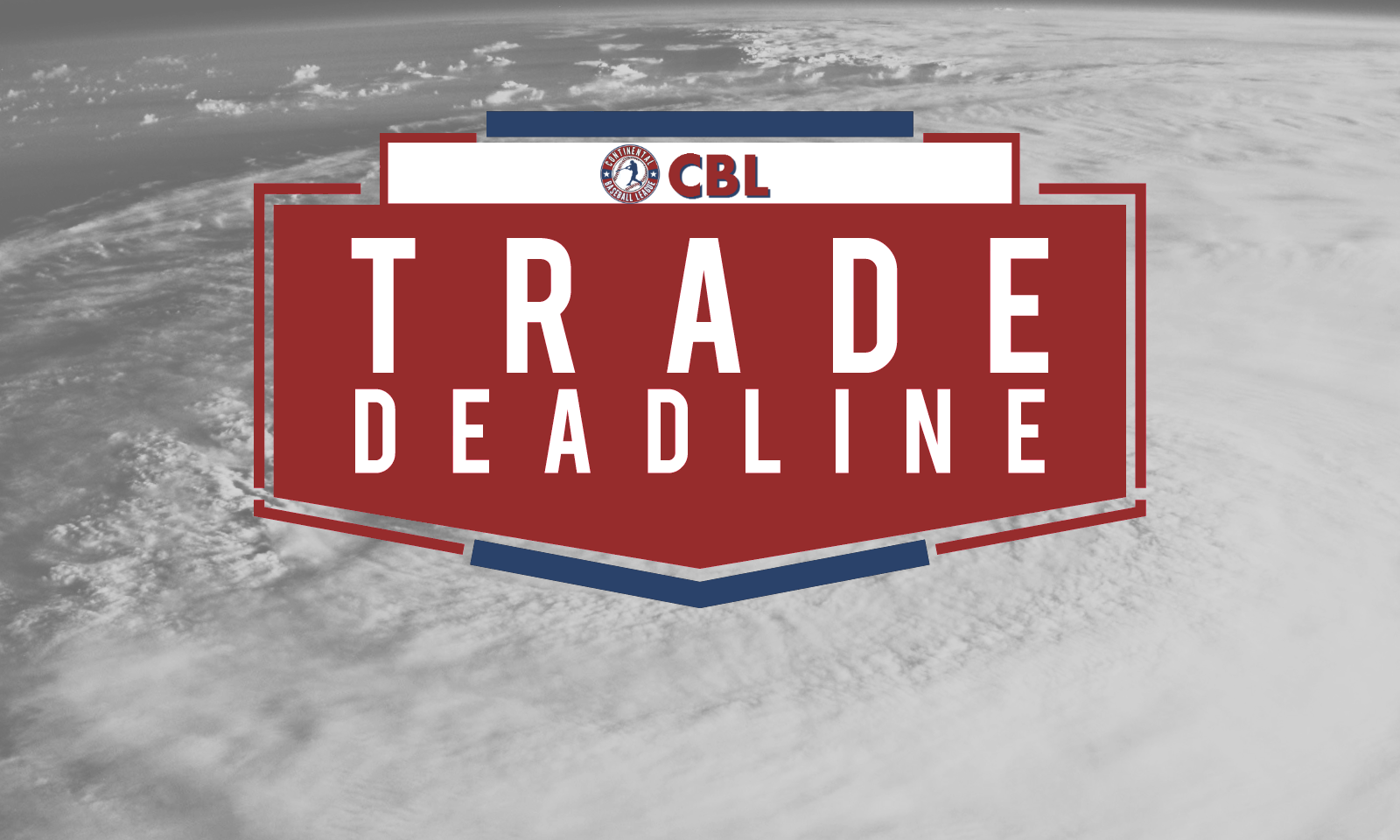 The CBL trade deadline is upon us! This will be updated all day as trades and MikeCasts come in. We will begin with the trades from last sim, so apologies to Dayton who made four major moves just prior to the deadline beginning. We will have a separate write up in the near future reviewing each of those deals.

Analysis: Caroline County had long coveted Stollings, even discussing a few trades back on draft day to land the youngster. The team is clearly rebuilding, and they have put a lot of faith in rebuilding around the top 2 picks in the most recent amateur draft, Stollings and Kade Guzman. Scouts feel this was one of the weaker drafts in CBL’s history, so we’ll see if Caroline County’s strategy pays off.

Colorado was admittedly not very high on the draft class this year, which was a problem because they had the first overall pick. The team eventually determined that Stollings would likely have the most trade value after the draft, and made him the first overall pick. The team’s scouting department was angry when they were unable to sign Vivarini as an international amateur just weeks ago, so adding him was very important for Colorado. Duffy should be a good starter, and is nearly CBL ready. He’ll slot in somewhere behind young phenom Jim Clarridge as the Gold Sox try to build a strong, young pitching staff. Alex Lange will also be given plenty of opportunities, and at the very least is a nice insurance option.

Analysis: It’s hard to believe Mahoning Valley’s pitching could get any better, but if Shawn Kelley can continue to pitch the way he has for Caroline County the last few months, that’s precisely what happened. With an $11.5M price tag for next season, Kelley clearly wasn’t in Caroline County’s plans. At this point in his career he belongs on a contender, and Mahoning Valley is obviously that. The Scrappers are unlikely to pick up Kelley’s team option in two seasons, which comes with a $4 million buyout, which is why the cash was included.

Joe Cox and Danny Mitchell aren’t elite prospects but both are young enough that they could continue to improve. After the team traded away pitching prospects to acquire Jerry Stollings, replenishing the low minors with some decent arms was important. Both players are expected to start in rookie ball, and are likely at least three or four years away from the CBL.

MikeCast: Combined with trade 3 below

Analysis: Just minutes after acquiring Shawn Kelley, Mahoning Valley made a quick move to free up a bullpen spot for the veteran. The Scrappers sent 23-year-old reliever Justin Smith to Minneapolis, landing future utility man Forrest Wall. It’ll be worth watching to see if Wall’s bat can improve enough to make him an every day player, or if he’ll be relegated to utility man for the majority of his career. With the talent Mahoning Valley has, Wall won’t be needed as a starter, so they are likely happy with him as is.

Minneapolis is clearly building toward next season, and shoring up their bullpen with another young hard thrower could pay dividends in the future. The team has several young middle infielders that are getting close to CBL ready, so losing Wall isn’t a huge issue for them. If Smith can turn his potential into results for the Millers, both teams will likely be happy with the trade.

Analysis: Speaking of playing for next season, the Millers made a bold move acquiring one of the game’s premier power bats while the team was 29 games under .500. Viera has been a very good starter for Minneapolis but his control continues to be a red flag. As he continues to get older, the lack of improvement has some league executives worried he’ll never reach his full potential. Even if he doesn’t, though, he’s likely to be an above average starter at the very least. Holguin doesn’t possess the same kind of upside as Viera, but he could be just as good overall since his control projects considerably better. Carlton was recently acquired from the Channel Cats in a deal that sent Matt Olson packing, and Kevin Padlo projects as a career minor leaguer despite having a good year in AA this season.

Gallo is the big name in the deal, and for good reason. He’s been a great player over the last few years, proving he’s one of the league’s better hitters by most statistical measurements. The risk with Gallo is that his defense at third base continues to decline, and a move to first base in the near future is likely in his and his team’s best interests. Gallo has been a considerably better player than former Millers first baseman Matt Olson for a few seasons now, but Gallo’s value is much higher as a third baseman. We’ll see if the Millers can build a contender around their new big name acquisition next season.

Analysis: A swap of minor league prospects hardly gets the fan base excited, but it could pay dividends down the road. Charlotte’s scouting department must be fairly high on Parkinson, a toolsy center fielder who is likely to become a very good defensive center fielder with great base stealing ability. Parkinson hasn’t really hit well at any level to this point, but maybe a change of scenery and some more development will help him reach his potential in Charlotte.

Boudreaux is a 6’5 corner outfielder with good speed, but he also hasn’t hit well at any level to this point. With a bigger frame and being two years younger, Boudreaux might possess a slightly higher upside than Parkinson, but Parkinson seems more likely to become a big league player because of his defensive ability. It’s a bit surprising to me that Charlotte was willing to part with Casarubias in this deal, as he’s shown flashes this season on the mound, striking out 27 batters and walking just 7 in 31 innings in Rookie ball. For now, this trade is nothing more than a foot note, but we’ll check back in a few seasons and see how this prospect swap worked out for both clubs.

Analysis: Jose Diaz is a solid prospect who’s off to an incredibly hot start in rookie ball, hitting .343 already. Vancouver was willing to eat the remaining $12M or so on Machado’s contract for the rest of this season, but it’s a bit of a risk if the Canadians only added him as an insurance policy. Machado will likely be very unhappy coming off the bench, if that is indeed the plan in Vancouver. Jesse Biddle is nothing more than a replacement level reliever, the kind of player that will be available on waivers nearly every week.

Machado is going to have to improve upon his early season struggles as well as shake off the rust, as he’s injured for another four days. Vancouver did well to add some depth for their playoff run, but Diaz is a solid prospect and the money they took on seems a bit high for the production. We’ll see if Vancouver decides to pick up Machado’s team option next season or if they let him become a free agent. It’ll largely be based on how he performs over these final two months, in my opinion.

Analysis: Both Estrada and Bass are near CBL ready young pitchers that should fit in nicely with Colorado’s plan to build around Jim Clarridge. The team gave up a few solid veterans in Smith and Wendle, but the Gold Sox were smart to look toward next season. Diechmann to me is just a throw-in AAA filler.

Dayton clearly wanted to beef up their depth for the stretch run, and did so with this deal. It’s not known how Dayton plans to use their newly acquired players, but both will see significant at bats over the next few months one way or another. A good trade for both teams current situations, and one that could really help Colorado expedite their rebuilding if Estrada can grow into a capable starting pitcher.