With the league’s annual rookie draft taking place in less than 48 hours, it seemed wise to take a slightly deeper look into the incoming draft class and some possible storylines surrounding the 2033 CBL Amateur Draft. Let’s dig in. 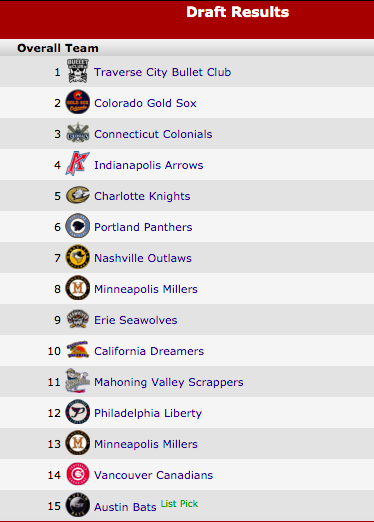 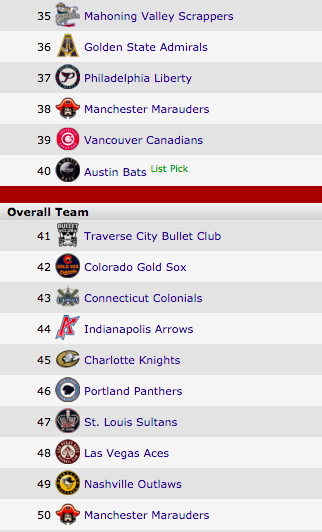 What will happen at the top?

Traverse City continues to be relatively unlucky, securing the top pick now in two drafts that seemed weaker than most, at least at the top. Former #1 overall pick Eric Pogue has become a very good player for the Bullet Club, to be sure, but isn’t quite the can’t miss talent that will help bring a franchise back from the bottom of the league. This draft looks to be similar, where there is no real consensus on who should go #1 overall.

First baseman Joe Castle is arguably the best pure hitter in the class, putting together back-to-back monster seasons for the University of Wisconsin Badgers. After hitting .403/.436/.593 last season, Castle’s gone to an even higher level this year, hitting .386/.447/.680 while nearly doubling his home run output. With 39 walks and just 17 strikeouts over his two collegiate seasons, some scouts feel Castle is the most CBL ready hitter to enter the draft in nearly a decade. He could conceivably make his CBL debut sometime this season for the right organization. The only reason he may not be the top pick is because he’s likely a below average defensive first baseman long-term, and seems destined to be a DH for the majority of his career.

Right fielder Danny Chapman had a huge season for the University of Florida, leading all players in home runs with 20. Chapman hit .426/.496/.794 in 48 games, adding a ridiculous 103 RBI in that span. He walked 36 times and struck out just 11 this season. Chapman projects as an above average defender at a corner outfield position, and would form a potentially lethal middle of the order with the aforementioned Pogue. Like Castle, Chapman is nearly CBL ready, although he is likely to make his debut at some point next season.

If the Bullet Club want to target a college pitcher, Mike Simms seems to be the top choice available. He came into the season looking like a surefire #1 overall pick, but his struggles have caused some teams to move him down their draft board. After going 7-0 in 10 starts last season with a 1.17 ERA, Simms went just 3-4 with a 3.82 ERA this year. His low strikeout totals each year caused at least one team to remove him from their board entirely.

“He’s never going to get swings and misses. Hard pass for us.”

There are several other high profile high school and college players that the Traverse City scouting department may have fallen in love with, and the top pick could of course be someone other than these two standout collegiate mashers. But the betting money at this stage is that Castle or Chapman will hear their name called first on Saturday evening.

Trades should shape the draft

The Minneapolis Millers and Manchester Marauders kicked off the draft trading season with a 4-for-1 swap, with the Millers landing the #8 overall pick for picks #21, 38, 58 and 78. A rival GM called the deal “interesting…” and said it should “work well for both teams.” As certain prospects fall down the draft board, expect to see teams trying to move around to get the player(s) they covet. Daquan Weems, one of the game’s better center field prospects, was traded to the San Diego Surf Dawgs during last season’s draft, as the Portland Panthers badly wanted to get back into round 1 to draft first baseman Bedrich Cerman. Power hitting outfielders Jack White and Robert Reynolds were traded for one another on draft night

If a player like Joe Castle should fall down the board a bit because of his defensive issues, will a team that believes in his bat sell the farm to acquire him?

Sources around the league believe every team likes just a handful of players, but not every team likes the same handful. Several teams are likely going to leave Saturday’s draft thinking they landed their top rated prospect, because of the confusion at the top.

Contending teams could also potentially be looking to add veterans to bolster their teams playoff chances. It’s a bit early in the season for teams to bring in reinforcements, but the draft causes teams to do some crazy things. Don’t be surprised by anything.

Dreaming on the high-school phenoms

With Chapman and Castle getting all the collegiate attention, which high schoolers have caught scouts eyes you ask?

Tyrone MacGruder had the best season of any high school hitter, showing an advanced approach at the plate and loads of potential. He hit .379/.495/.713 while leading all high school players with 16 home runs. Scouts aren’t fond of his defense in the outfield, however, and think his personality and makeup might cause issues as well. The talent is there, but scouts worry that MacGruder may not ever reach his potential.

Those that like MacGruder, though, compare him to California Dreamers Designated Hitter Andy Ramsey. They speak highly of his future offensive potential, and while they have a higher opinion of his defense than his detractors, they think his bat will play anywhere even if he’s a poor defender.

At 6’2, 195 pounds, MacGruder has the build to improve his defensive abilities long-term, but most scouts agree that his bat is his meal ticket.

Jeremy Frontino is arguably the best high school pitching prospect in the draft, although teams seem to be split on whether he projects as a starter or late inning reliever at the CBL level. The 17-year-old left hander was used out of the bullpen his last two seasons, despite starting 10 games and pitching well as a sophomore. He’s posted ERA’s near 1 over the last two seasons, and scouts see a lot of projection in his stuff long-term.

Steve Love had an impressive season, going 8-0 in 11 starts with a 0.99 ERA. However, his 44 strikeouts in 64 innings has several scouts questioning his natural stuff. With an incredibly hard work ethic and three years of impressive performances, Love could very well hear his name called very early on Saturday night. Be sure to tune in to find out which future star your favorite team has selected, live, Saturday Night, 5:00 PM, PST.