SAN DIEGO, CA — After a disappointing 2017 season, the Surf Dawgs are unveiling a new logo and uniform for the 2018 season. The team hopes to revive the fan base after losing their two most-liked players in Eric Hosmer and Jose Reyes. In case you missed it, Hosmer–was one of the pioneers of the franchise–was shipped to Richardson City for young slugger, O’Koyea Dickson. Reyes on the other hand, declared free agency few days ago.

“I feel like we need a fresh start. By fresh start, I meant re-tool. Not a full re-build. We still have good players in this team that I believe can take us to the post-season next year and hopefully to the Premier Cup. I would like to thank Eric (Hosmer) for his time here in San Diego, he will be missed for sure.” GM Imasa said. When asked if he discussed contract extension with Jose Reyes, the GM replied with the emphatic “No”. According to sources, the ownership wanted to extend Jose Reyes after his tremendous second half offensively. “Jose (Reyes) had a very good second half offensively, I’ll give him that. But defensively, I don’t think he’s our guy at short.” GM Imasa added. Reyes put up a -4.3 ZR as a shortstop last season. 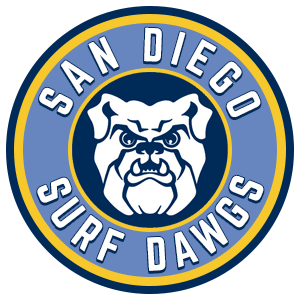 Back to the unveiling, the new logo is still circular and it is a combination of old school and new school. As far as the color goes, it looks like the team is emphasizing the navy blue more than sky blue this time. Other than that, the colorways are the same. In addition, gone is the cartoony-kid-friendly-cool-looking-rayban-wearing-Surf Dawg and replaced by a more aggressive bulldog that does not wear shades, no surf board either. Which leads to this question: Is this the end of Sonny The Surf Dawg?

“No, (laugh) Sonny The Surf Dawg will still roam around Petco Park during games. However, Sonny will have a new buddy named Bobby the Surfing Bulldog, so yes we’ll have two mascots next season! Two is better than one right?” GM Imasa said. When asked why the team chose a more aggressive approach next season, “I feel like we need a new identity. We’re gonna be younger next season, hungrier, and most importantly, we’re gonna win some games next year.” 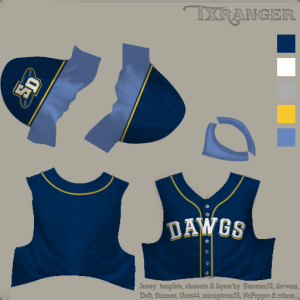 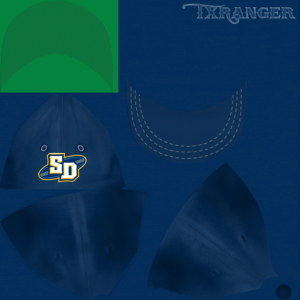 As I mentioned, the team seems to be emphasizing the navy blue more this time around and that clearly shows on their new primary uniform. It features the navy blue as the primary color with white, gold and sky blue trim. Plus a much cleaner “DAWGS” in the front of the jersey.

“TxRanger Designs did an excellent job with our new logo and uniform. I would like to thank him again for his work. Also, I love the new shade of blue this year. I can’t wait to see our players wear them come Opening Day.” GM Imasa said.

On the poll, 87% of fans likes the new design. That’s a very good percentage, but you can’t ignore the fact that there’s still some fans who prefers the old school Surf Dawgs design. Who knows, the team might bring it back occasionally.