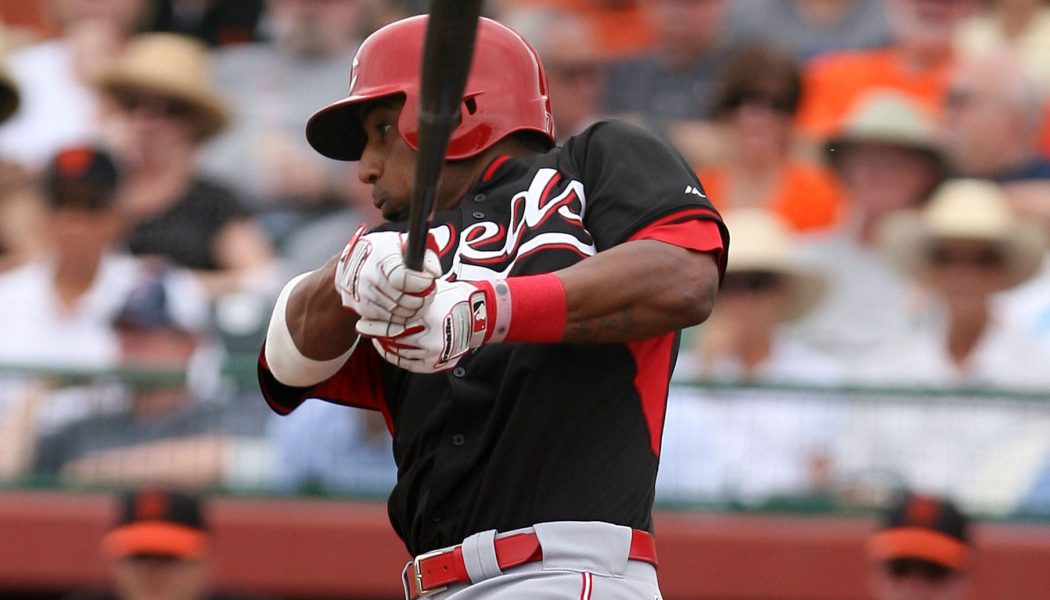 Two time champion Richardson City, and legendary owner Imran K set a franchise record in wins last season with 97.  Imran, regarded by most of the league as a wily veteran that always gets the most out of his players, should be setup once again for a deep playoff push.  When you consider what RC had to overcome in injuries last year, their winning season becomes even more impressive.  Like a chess master moving pieces around his board, Imran closed FA deals this offseason that created depth and flexibility to his CBL roster.  He was also active in the minor league market signing 15+ players to minor league deals with cash signing bonuses to bolster his minor league options.

RC crowds could be heard chanting “Sano” and “Yor-monster” throughout the year last year….with both players having near career years in all of their offensive categories.  Yorman, or “Zombie” as his teammates refer to him, has been a stalwart in the RC lineup for the last 5 years and continues to be the team catalyst and most valuable player.  “Rat” Rivera had a breakout season last year for RC, and he will be relied upon this year to carry more of the offensive burden…he should be up for the task.  Soler was a nice addition and should provide some experience and outfielder depth in case someone gets injured….which in RC is pretty much a given since players seem to get injured while running on and off the field at an alarming rate.  The acquisition of super-phenom, Jim Clarridge, has the RC fans in a frenzy, however expect him to have growing pains.  Last year Clarridge led the league in Ks per inning, however he also sported a 4.51 ERA, 1.41 WHIP and lost 14 games for Colorado.  The RC staff isn’t bulletproof this year and might prove to be their downfall.  Kelliher had a nice season last year as the team’s closer saving 39 games, however handing off games to Kelliher from the starters will be an exciting few innings and ones I’m sure the RC fans will be holding their breath.

RC doesn’t have many “cant-miss” prospects as much as they have a plethora of really good ones.  Dominican signee 3B Gilberto Lopez hasn’t had extensive pro experience yet, however he absolutely scalded the ball in A ball last year batting over .300 with an OBP over .450.  #1 draft pick of 2018, C Steve Spence is developing quickly and is set to start the year AAA after scorching AA last year with a .280/.391/.444 slash line.

In 2021, Austin kept their surprising record intact.  They have increased their number of wins EVERY year since the inaugural CBL season.  When asked about his thoughts on the Bat’s chances this year, owner Trey Schalk responded, “We know it will be very tough sledding this year.  The HL West is stacked with great players and great managers.  We will just do our best and focus on beating Erie, and RC this season..everything else will take care of itself.”  Austin will have to improve to stay competitive.  The team had mediocre hitting, fielding and pitching stats last year, but were saved because they had an amazing run of wins in 1-run and extra inning games.

The team’s re-acquisition of 3B McMahon should prove to be helpful since last year’s starter, Chapman never could reach his full potential in Austin.  This year will depend on the Bat’s training staff and how well they can keep the players pain free and healthy.  Arguably Austin’s two best positional players both have long histories of injuries and losing one or both during the season will prove to be disastrous.  SP Joe Campbell needs to take a step forward and prove he is not a mediocre pitcher.  Campbell looked unhittable during the 2021 playoffs, however during the season he had a 4.91 ERA.  Austin’s training staff is looking into if Campbell might be suffering from bi-polar disorder or a unique form of adult ADD.  The staff will need to get it figured out if the bats hope to stay in a pennant race this year.

CF Alfredo Ortega hasn’t seen much pro pitching yet, however scouts agree that his defensive mechanics are sound and he has shown the potential to have a lively bat.  Ortega is scheduled to begin the year in A+ ball this spring.  #1 draft pick from 2020, RP Manny Soto, impressed scouts this summer hitting 103 on the speed gun with his fastball.  Soto is working on learning a 3rd pitch and building his stamina to potentially start, however in the meantime the Bats scouts are excited about the potential this young man has shown.

After enduring multiple management upheavals over the last years and amidst a few player tampering scandals, the Admirals feel like they have a proper captain in Ed Malloy.  Malloy, is a quiet owner who normally keeps to himself and enjoys lurking in the shadows as he runs multiple multi-national companies and his childhood team..the Admirals.   This offseason, in order to shake things up a bit and keep pace with RC and Portland, Malloy fired his scouting director and signed experienced vet (20 years), Tom McNamara.  “We needed a change and a different approach.  Tom’s our guy” said Malloy.  Through Malloy and McNamara’s direction, the team went to work this offseason pulling off one of the biggest one-for-one trades of the year and signing some big name free agents.

Vallejo is talented across the board.  Malloy has done an excellent job preparing this team for battle in the HL West and they should have success.  3-time all star Corey Dickerson will once again lead a potent offense poised to take a leap forward in production.  RF Jose Pena is finally reaching his full potential and should be a force this year for the Admirals.  Pena was hampered last year with an injury however the speedy right fielder should be back and healthy as ever in 2022.  With the acquisition of SP Medeiros, the Admirals finally have an ace to lead the staff.  Medeiros had a breakout year last year for MV winning 16 games with 186 Ks.  Questions abound though around VAL’s ability to close out games.  Frieri is penciled in as the team’s closer, however he only had 1 save last year.  Don’t be surprised to see FA acquisition Jonny Venters get a shot at closing games before the year is out.

SP Alfredo Hogan, who came over from ALT at the trade deadline last year looks to begin his year in AAA after meteoric ride up the organization last year.  Hogan has a live fastball and CBL ready stuff and might get a promotion sometime this year if VAL stumbles.  Many international scouts are high on defensive wizard LF Jose Castillo.  Also an Olympic track star, Castillo set the 100 meter record for his country this year and trained in the same facility as world record holder Usain Bolt.  Once he is unleashed, it will be interesting to see how many steals Hogan can pile up during his career.

If you are a hipster, then you probably have a faded out Portland t-shirt jersey and a Panther logo phone case.  The Panthers are THE youth movement of CBL franchises.  As this article goes to air, in ALL of the Panther organization, there are only two….yep, two…players over 31.  I’m not saying that British owner, Phil Doyle likes young men…but well, yes..yes he does.  The Panthers underperformed last year..blame Brexit, blame the terrible weather in Portland, blame whatever, but don’t blame Griffin Helms.  He was a beast last year leading the league in OBP at .420….and <whispering>…he hasn’t hit his prime yet.  For the last few seasons, a common Portland rumor continues to be echoed…”have you seen Phil’s team?  They are on the move”…unlike the killer bees or Y2K that never materialized…this Portland team is legit…and they are coming.  Between tweets, guzzling lattes and buying skinny pants, Portland fans think this is the year that their team takes a huge leap forward in the FL…and I tend to agree.

Gatewood, Helms, Na, Turner…do those name strike fear in the hearts of pitchers?  Not yet, but they should.  I don’t know how these guys have gone under the radar as long as they have…however they are about to hit the big time.  Doyle has assembled a strong lineup of solid defensive speedy players who will murder mediocre pitching if/when they get a chance.  Ace pitcher Gerrit Cole leads a young and highly competent staff of pitchers whose last year’s 4.27 ERA should be a thing of the past.  For the first time in franchise history, Portland should finish the season with a team ERA of less than 4, and if they can work it down under 3.5, this team has a shot at winning the division.  Closer Ben Shaw had a nice breakout season  in his new role and should continue to excel.

With so many talented youths, we could write paragraphs here, alas I’ll focus on a couple CBL ready hipsters….RP Sandy Andersen and Norberto Aguilar.  They are Panthers ready to roar.  The have been percolating in the Panther minors for seven years and it is time for them to be unleashed on CBL hitters.  “Soupy” stumbled a little in AAA, but his maturity has caught up with talent and he should be an anchor for the POR bullpen.  Sandy has just dominated wherever he was asked to pitch.

After two seasons of mid 60s wins, Gold Sox owner Brandon Zima had seen enough…big moves needed to be made.  The bench coach and pitching coach were let go, prized free agents Kershaw, Alcantara, Garza were all given their walking papers…then the big news hit…can’t miss super prospect Jim Clarridge had been traded.  Zima was going with talent quantity over quality..and who could blame him, his team had gaping needs across multiple positions.  What Zima got back for Clarridge was impressive, a top 5 pitching prospect in Gooden, a fire balling RP in Julian Gonzales and a few other pitching hopefuls.  Only time will tell if Zima made the right choice, however one thing is for certain…Zima has a lot of grit pulling the trigger on the trade.

All-star Matt Olson leads the Gold Sox offense who has been bolstered considerably by new veteran catcher Gary Sanchez, RF Tapia and LF Nimmo (thank you very much Charlotte!)  Pairing those new players with Gold Sox budding young players Albright and Jordan should make this lineup respectable and should do damage against opposing pitchers.  Young prospect Gooden looks to vie for a spot on the team this year and should join Crick, Zimmerman and Reid-Foley as the core starters for the Sox…not a dominating group, however lots of potential upside.  RP Chris Kohler looks to be the odds on favorite to close games for the Sox, however with one save to his name last year, finishing out games might be a roller coaster ride for the groundball specialist.  RP Julian Gonzales might wind up winning the closer spot before the year is out as he has had success in that role with RC in the past.

Thanks to good drafting and trade deals the Gold Sox have one of the best stables of prospects in the game.  LF Johnny Bush looks like a legit future all-star with power, speed and a good glove.  Garrett Gooden has a 5-pitch arsenal with Ace-type stuff.  He was met with some rough outings last year with RC, however with a little more development, he could be a 15-20 game winner.