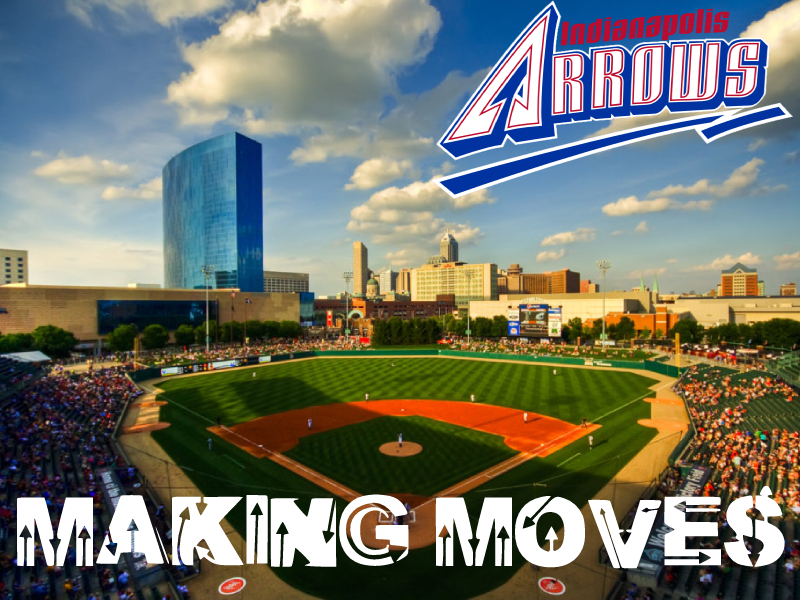 INDIANAPOLIS, IN — It’s been a busy month for the Indianapolis Arrows. First was the announcement of the GM change. And at a press conference today at Mosaic Stadium of a few more newsworthy items and one big player announcement.

Up first it was announced that the Arrows have signed two of the fan favorites, both LF Kevin ‘International Assasin’ Garvey and SS Khalil Greene to contract extensions.

Garvey was a 2 year contract extension worth a total of $29,080,000. Garvey said today “I look forward to working with Indy to win a championship. I don’t buy into the notion that guys can play only in one city or another, that you need an “atmosphere” surrounding you, or that the fans get you up for a game. I mean, at 26 years of age you ought to be able to get out of bed in the morning and show up. And that’s what I’m going to do”

Greene also met with the press and said “I will happily sign an extension with the Arrows organization. You made me the best offer you could and I’ve got to admit that I like what you’ve proposed.”

The other big news and maybe the biggest was that the Arrows have came to agreement with the Philadelphia Liberty to acquire RF Jon Channon. Channon is probably best known around the league for his miraculous career year of 2032 where he hit 68 homers to become the CBL all time single season home run king. He has only topped 30 one other time in his career and that was last season at 33.

Some might say he’s not worth the massive contract ($27.4M over the 4 years with a player opt out after 2036) but GM Jeffrey Everroad thought otherwise. “Yeah the contract is pretty big. But compare it to what lesser players or comparable older players are getting this offseason and I don’t think it’s that far off.” “If nothing else, I want our fans to know that we are dedicated to winning and doing what it takes to not only get our fans their first playoff appearance but also championship.”

Are the Arrows planning on making any more moves? “I’d love to get some additional starting pitching. But I’m sure every GM in the CBL would say the same thing. So whether that happens remains to be seen.”

If nothing else, it should be a very exciting season for anyone who ventures to the ballpark to watch your 2035 Indianapolis Arrows. Here’s to hoping the bats can score one more run than the pitching allows more times then not.