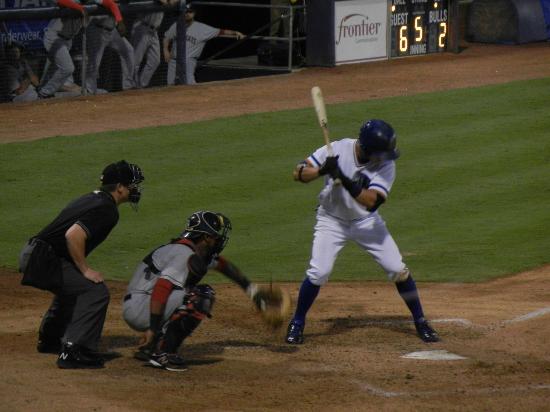 Durham, NC – Failure is among the most difficult things to handle in life, which makes playing baseball especially difficult. Everyone knows the old adage that a good baseball player fails 7 out of 10 times he comes to the plate. For Dominic Sackett, though, failure had been a rarity for the first 17 years of his life.

Regarded as one of the best young players to come out of high school in decades, Sackett was a sought-after amateur. Akron’s fan base was ecstatic (unfortunately, everyone eventually leaves Akron, and the team moved to Mahoning Valley this season) when they learned they’d be selecting #1 overall, and one long-tenured winning CBL GM even called him a “new generation Miguel Cabrera” prior to the draft. He hit .421 with 11 home runs in 37 games his final season in high school. The hype was real.

That final season in high school just happens to be the last time Sackett hit well at all. After being drafted late in the fall (The CBL’s draft was in late fall at this time), Akron sent him immediately to the Winter League to get a look at their supposed super prospect. In hindsight, it was a mistake.

Sackett played in 50 games, but hit a miserable .232/.256/.280, hit no homeruns, and struck out 45 times compared to just 4 walks. He was horribly over-matched. Nobody seemed bothered by his poor performance, mostly because nobody really knew what to make of Winter League performances. It was a sign of things to come.

In 47 games at rookie ball as an 18-year-old last season, Sackett hit .257/.270/.439 with 6 home runs, showing small glimpses of the potential he’d shown in high school. He still had trouble with plate discipline, striking out 50 times but walking just 3. Despite that red flag, he was almost unbelievably promoted to A ball for the season’s final 25 games. He hit .289/.310/.373 with no home runs, and another horrible 26-3 K:BB total.

Heading into this season, Sackett had played in 124 minor league games, striking out 121 times compared to just 10 walks. His prospect status had fallen, and was only getting worse. He was going to need to have a good 2017 season to even be in the future plans of the organization.

Sadly, he’s been even worse this season. Repeating the same A-ball level to begin the year, Sackett is hitting .170/.170/.298/ through 14 games, with yet again an unsightly strikeout to walk total, 17-0. One fan at a recent Durham Bulls game was pictured with a sign that read “Sackett can’t hack it.” No word on if that fan was former GM Jason Gilmartin.

“He’s a terrible defender, and he looks like he forgot how to hit,” one scouting director told me. “He’s not even worth tracking anymore. If he hadn’t been the number one pick, that organization (Mahoning Valley) would’ve probably cut him already. He’s got no future in this league.”

Others say it’s still too early, and he could improve over the summer. But that’s looking less and less likely, when 141 games in he’s struck out 138 times with just 10 walks and little to no power. It’s unfortunate that the young man was unable to live up to the hype surrounding him and the #1 overall pick label, but let it be a reminder to teams picking near the top of the draft this summer. Even sure things aren’t sure things in this sport.