We had hoped to sit down with newly appointed general manager of the Charlotte Knights, Matt Wells, as soon as the move happened. This move was very surprising given the Knights success in recent years, making the playoffs three years in a row, and currently sitting in first place. Even more surprising was the naming of Wells as the new general manager. At just age 22, Wells is only one year removed from college graduation, and not only was he not apart of the Knights franchise in any capacity, but he had not held a job for any team in the Continental Baseball League, or for the commissioner’s office. Wells graduated from New York University only 367 days before his naming as the new general manager. Receiving a Bachelor’s of Science in sports management, with a concentration in organizational management, Wells was determined to one day work in the CBL, hopefully as a general manager.

How did you react when you got the call from owner Tony Rodriguez asking you to take over as general manager?

“I had actually been eating dinner at the time. I was just catching up on some of the events of the day, watching television, eating leftovers in my overpriced New York City apartment. When the phone rang, I almost didn’t answer because I didn’t know anyone from Charlotte who would have been calling me. I hadn’t seen any reports or rumors that the general manager position was open. But I answered the phone, and immediately Tony offered me the job. I hadn’t even had time to ask who it was. It was just as surprising that I had never even reached out to Charlotte about any jobs. I was in awe that the call, and the offer were real.”

Why do you think you were chosen for the job, and why so quickly?

“Honestly, I have no idea. I mean, I have full faith in myself that I can take this team from the level they’re already at, and make them champions, and ultimately a dynasty, but I’m not sure why they chose me, and especially not why so quickly. Like I said, I had never even reached out for a job with Charlotte, never interviewed, nothing. But I must have been on their radar. I’d like to think it was because of my degree from NYU, but there are so many other, more experienced candidates, I was amazed they chose me.”

What were your initial thoughts on the team?

“The team is fantastic. I mean sure, there are a few places where we don’t have the best player in the league at that position, but I firmly believe we have a top five player at every position. I think there are a few places to upgrade, but this team is off to a winning season, and has proven itself time and time again.”

Well, obviously you felt you could do some upgrading, as you’ve made four trades in just over 6 days as general manager.

“Yes, at first we were just trying to add a few small pieces, maybe a backup middle infielder, an extra rotation hand, and some more relievers, but right away we drew interest in Reese [McGuire] and we felt the trade was right, as we got back two young, high potential starting pitchers, in Thatcher Brown and Jesus Arroyo, along with a power hitting catcher who is still developing, and could be an important piece in our future, in Santiago Nessy. At the same time, we found Tanner Scheppers, who wasn’t that expensive in our opinion, and we got another backup catching option in John Ryan Murphy. Then came the craziness. We were originally looking to just move Alfredo Franco, a guy we love, but is a little bit of a luxury for a fourth outfielder, especially since he’s limited really to just right field, and is power focused. We found a deal that we loved, getting [Michael] Chavis in return, along with Bud [Robertson], who we thought could turn into Justin Williams and Kevin Gausman in the future. We thought that was a done deal, but at the last second, we were informed that deal would only go through if Syracuse made another deal to acquire a new left fielder. As it turns out, that was going to be a three team trade, involving Altoona and us as well. While we absolutely love Justin, we were getting back [Ruben] Alaniz, who we think can be the best pitcher in the league, if he has the defense behind him, and we got Christopher “Hammer” Machamer. We didn’t like giving up our beloved captain Joe Mauer, but his salary was holding us back, as we hit a year where many of our players hit arbitration and start to rise in cost. After mulling over the offer for hours, including constant badgering from Justin [Zima], and Gary [Currier] trying to convince us it was a good deal. Ultimately we decided the prospect of having Alaniz now, and Bud and the “Hammer” in the future excited us too much. And with getting Chavis in return, we had a new left fielder, whom we believe is going to be as good, if not better than Williams. We felt it too good to pass up.”

Do you have any more moves in the works?

“Oh come on, no spoilers. Of course I’ll always be working the phones, and when the right deal comes our way, we’ll take it, but we feel really happy with where our team is at. We have what we think is one of the best staffs in baseball, we have a superstar at shortstop, we have an amazing outfield, and one of the biggest and hardest hitting bats at third base. We’ll still look to add arms to the bullpen, and we still need that backup middle infielder, along with a fourth outfielder, but we feel very confident that the team we have on the field now can run away with the division, and make a long playoff run, ultimately ending with us hoisting the Premier Cup.”

What Could Have Been: Jake Odorizzi 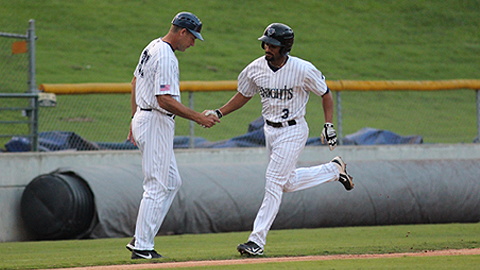