The date was November 1, 2022. 32-year-old outfielder Anthony Gose, coming off an injury-plagued .227/.311/.318 season while playing in just 20 games, informed the Richardson City Blood Raven he would not exercise his opt out clause, meaning his $10.5M salary was officially guaranteed for the 2023 season. It was widely expected, but it was an issue for Richardson City because they were near their budget already.

After scouring the league for a trade partner, only one team was willing to acquire Gose, but even that had a catch. The Minneapolis Millers would want two prospects as their price for taking Gose’s final unproductive year of his contract off of Richardson City’s hands.

“We zeroed in on Don Sanders almost immediately,” a Millers source tells me. “He wasn’t an elite prospect at the time, so it seemed like a reasonable ask. His defense was below average, and we knew RC valued defense quite a bit, so it seemed plausible Sanders wasn’t viewed all that highly. We really liked him as a future starting catcher, although I’d be lying if I said we knew he was going to be as good as he’s been.”

The Millers and Blood Raven would eventually agree to a deal that saw outfielder Anthony Gose, catching prospect Don Sanders and another prospect, Tomas Cruz, head to the Millers in exchange for a clean, crisp one-dollar bill.

“I think our owner might have signed the $1 bill, and we actually mailed one as a joke to RC,” the same source tells me, chuckling.

Gose would play in 67 games for the Millers during the 2023 season, hitting just .235/.281/.359, but playing above average defense in left-field. The Millers finished the 2023 season with a 68-94 record, so it was clear that adding Gose was not done to improve the big league squad. Tomas Cruz would never see the big leagues, proving Richardson City right that Cruz had almost no value.

But Don Sanders has been a different story. He spent the 2023 season at the Millers AAA affiliate, and hit a respectable .284/.321/.408, but nothing seemed to suggest future star. He was given 5 plate appearances at the big league level late in the year. Sanders made the big league roster out of spring training in 2024, and hasn’t looked back since.

Sanders arrival in 2024 coincided with the franchises first winning season and playoff berth since 2015. The Millers have made the playoffs every year since 2024, and are well on their way to a 9th straight playoff appearance. In 9 full seasons, Sanders has hit .298/.355/.531 with 251 home runs and over 40 WAR. He’s been a consistent force both at and behind the plate throughout his Minneapolis tenure.

This season, the Millers haven’t used Sanders nearly as much as a catcher, thanks in large part to the addition of defensive standout Reese McGuire. Sanders remains the starting catcher against left-handed pitching, but on most days he’s been happy to find himself penciled in as the DH. He’s caught just 36 games this season after catching more than 100 almost every season.

“It was tough at first, getting used to not catching a lot,” Sanders says. “It’s all I’d ever done. But I’d be lying if I said it didn’t wear my body down. I feel much fresher than I have in years past at this time of the season.”

Sanders offensive season this year seems to back up his assertions. He’s hitting .308/.368/.608, and has already hit a career high 39 home runs in just 118 games.  Most players don’t have their best offensive seasons at 33 years old, but it’s clear moving from catcher to DH has helped Sanders avoid fatigue quite well.

The Millers know how lucky they’ve been to find a leader like Sanders for the past decade, but one thing continues to bother the team’s front office.

“We need to win a championship before he goes,” the Millers GM tells me. “He’s meant too much to this city and this organization not to give him at least one championship. Hopefully he plays for a handful more years and we get a lot more chances.”

With a team that has gone 31-12 since July 1, the fans and staff are as optimistic as they’ve ever been, but after a decade of near misses, the Millers know nothing is guaranteed in October. 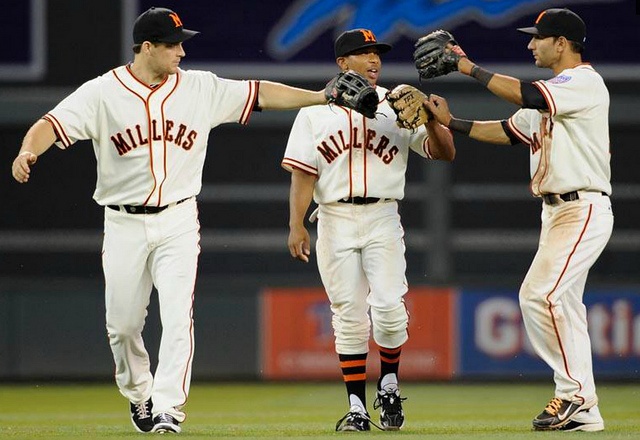