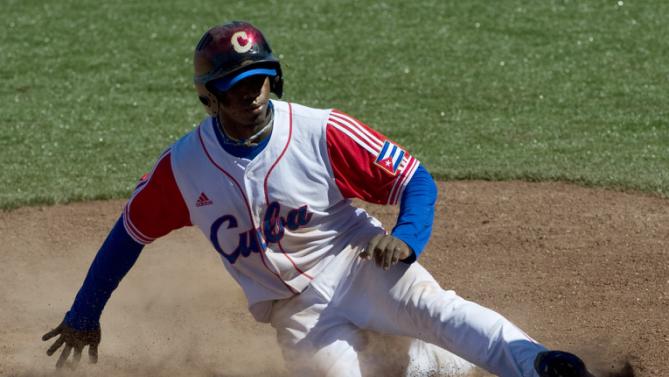 Manzanillo, Cuba – The date is November 8, 2016. A 15-inch tube television is perched on a desk in a small local home, and a national US news reporter is discussing the incoming results for the United States Presidential Election. A 16-year-old Cuban eagerly watches with his parents.

“As you can see, Bret, Bernie Sanders is cruising to the electoral college majority against Donald Trump this evening,” the reporter says. “We are set to announce that Sanders is the projected winner with 299 electoral votes, and he will be the next president of the United States.”

The family watching erupts in cheers. After decades of poor relations with the United States, former President Barack Obama tried to mend the divide between the two countries, which allowed the US news to broadcast at certain times in Cuba. It also cleared the way for Cuban baseball players to join the United States professional baseball league without having to defect to another country first.

With a Bernie Sanders victory, this family felt the potential to send their son to a US university was finally a possibility. A Trump victory probably would have closed the border as his immigration stance was widely known. They’d be watching President Sanders and his policies very closely over the next few years, because they felt a college education in the United States was an opportunity their son could not afford to waste.

A myriad of CBL scouts can be spotted throughout the half-full stadium in Lubboch, Texas. The Red Raiders logo fills the center field grass, alerting those who come just what school they’re watching.

Texas Tech is holding an open practice today, allowing scouts from all over into the stadium to watch what is basically a pro showcase. While the Red Raiders have a few players who may be drafted in the 2020 and 2021 drafts, the most intriguing prospect scouts wanted to see was a redshirted Cuban by the name of Ernesto Encarnacion.

“He’s got the CBL body type we love in the outfield,” one team’s scout says. “Tech did the right thing redshirting him, letting him get used to life in the US, but I wish we could watch him play some games already.”

As Encarnacion steps up to the plate, scouts sit up straight and a few even walk directly behind home plate, peering through the protective netting. The show the young man puts on over the next 7 minutes is something these scouts will never forget.

Dominguez shouts “Liberado!” meaning you’re free to hit it wherever you want. Encarnacion hits 5 home runs and three balls off the wall. Finally, on his 15th pitch, Ernesto pops one up toward the shortstop position.

“Ahh!” Encarnacion shouts in anger. He wanted a perfect round. He hits 7 of his next 10 pitches for home runs, with scouts literally dropping their jaws.

“He’s a perfectionist for sure,” Dominguez says. “He works really hard, so he gets angry when he makes a mistake. We’re trying to instill in him that he’s going to fail at times and he needs to do a better job of handling it. This is baseball. Failure is impossible to avoid.”

There’s little doubt that Encarnacion is good enough on this day to be a key contributor for the Texas Tech baseball team, but helping him better understand English and ensure he received passing grades in his classes was more important to both Dominguez and Encarnacion’s family.

As the scouts file out, they continue to talk about Ernesto and how great he looked at everything.

“His 2020 and 2021 collegiate seasons are going to be something to see,” I overhear one scout say to another. “He’s my top ranked prospect at any age. We’d take him #1 right now if we could.”

After months of campaigning on a free public college education policy, Sanders made it one of his top priorities upon taking office in January of 2017. Despite the pleas from the right that there simply wasn’t enough money to do it, Sanders and his team went about proving them wrong.

They had determined that they would need about $63 billion per year to make all public colleges tuition free across the country. That seems like a large amount of money to just pull out thin air, right? Well, turns out the US Government was already spending about $70 billion a year on grants and scholarships for college students.

Adding in Sanders 1% tax on Wall Street speculation (a 5 trillion dollar business tax free) and that meant the US Government had $120 billion to spend on college education. In order to allow low income kids to still attend private colleges if they so desired, Sanders and his team kept $57 billion of $70 billion that had been allocated for Grants and Scholarships where it was. That would be more than enough as kids going to public colleges would no longer need grants or scholarships from the Government. That meant $63 billion was left over, which covered the tuition costs of public college.

After finally passing the bill in December of 2017, the changes would take effect for the 2018 school year. And once it passed, Sanders began an immigration bill that expanded the collegiate opportunities for those in other countries. Adding talented and intelligent people with different cultural backgrounds would only make the country a more intelligent, diverse place. One of those countries was Cuba, and Texas Tech head coach Raul Dominguez had a lot of connections in Cuba.

Ernesto Encarnacion’s first season, as a freshman redshirt, was as spectacular as most expected it to be. He routinely made highlight reel catches, running down balls even CBL outfielders wouldn’t have gotten to. Some scouts were calling him the greatest defensive outfielder in NAIA history.

He worked so hard that his teammates nicknamed him “Gym rat” which eventually just became “Rat.”

Rat hit .364/.450/.695 while leading Texas Tech to a 28-22 record and an invite to the College World Series, where the team would eventually be eliminated by the Florida Gators.

“We had a few other solid players,” Dominguez admits. “But Rat carried us. No way do we make it the College World Series without him. We’re looking forward to next season.”

Raul Dominguez grew up in Panama but married a Cuban-American woman who’s family had been going back to Cuba every year since the embargo was lifted. He’d made several contacts in the Cuban baseball world, mostly out of curiosity. He never expected to recruit a Cuban athlete to Texas Tech, but he loved baseball and watching some of these kids play was a real treat.

Once Sanders collegiate opportunities bill passed, though, Dominguez thought he might have a chance to bring a kid or two back to the United States. He knew it’d be a tough sell, because the player would have to be good enough to play division 1 baseball. But if he was that good, it would mean he was almost certainly good enough to play for the Cuban National team instead. The player would also lose his free agency rights and be subject to the United States draft, which would likely cost the young man millions of dollars upon signing. So it’d have to be someone who valued the education and collegiate experience more than a few million dollars. Not an easy sell.

“The top international amateur will sign for between $10 and $15 million, while the top draft picks are usually between $4.5 million and $10 million,” A league executive tells me. “But the exposure from a collegiate season could make a $4 million international signing the #1 pick, and he’s suddenly made $3 or $4 million more by playing in college. There’s pros and cons for each side.”

Days after the team’s tough season ending loss to the Florida Gators, Ernesto Encarnacion is on his way to a local elementary school near the Texas Tech campus.

Once he learned there were several schools with a large throng of children coming from Spanish speaking homes, he wanted to help.

“He knew how tough it was for him to learn English while he was getting his GED,” one of his advisers tells me. “It wasn’t a school requirement, he just wanted to help some kids. He felt like he’d been given a great opportunity and he wanted to help others anyway he could.”

Encarnacion got along with the kids great, and even was able to get them all tickets to next year’s home opener after speaking with the team’s compliance department.

“They were much more enthusiastic with him around,” one of the ESL teachers tells me. “He was always joking around, keeping things loose, but the kids learned things from him too. He was really a great person to have around.”

In the summer of 2017, Raul Dominguez first noticed Ernesto Encarnacion. He was so much better than the teenagers he was playing with it was almost impossible to miss him. The more he watched this young man play, even just pickup games against his peers, the more he realized that Encarcion was a program-changing talent that could elevate Texas Tech to the pinnacle of college baseball. He had to have him.

After researching just how a Cuban could become eligible for a US college, Dominguez sat down with Ernesto’s parents and laid out a blueprint for their sons future.

He’d spend the rest of 2017 and most of 2018 learning English and getting an GED from an online course that would make him collegiately eligible for the 2019 season if all went according to plan. Dominguez explained that Encarnacion would no longer be an international free agent, and would be subject to the draft rules. He laid out the financial difference it could make, and then explained how Texas Tech was going to develop their son into both a great baseball player and a great man.

The Encarnacion’s were sold, as long as it was what their son wanted. Ernesto couldn’t have been more excited. He worked incredibly hard over the next year and a half to be eligible for President Sanders collegiate opportunity, and the hard work paid off when he was accepted into Texas Tech.

“We decided with him and his parents that it was going to be a big culture shock, so a redshirt season was in his best interest,” Dominguez says. “I think it was the right decision for him long-term.”

With his first taste of college baseball behind him, “Rat” is universally regarded as the draft’s top prospect next season. It would be a major surprise if he doesn’t go #1 overall next June.

“I’m so grateful for everything,” Encarnacion tells me in nearly perfect English. “This has been a lot of work, but it’s been so fun. I know I made the right decision.”

He will likely sign for something close to $8 million, which is probably more than he would have gotten had he been declared an international amateur free agent in 2017.

“We were tracking him, but he wasn’t seen as the top guy. I think he would’ve signed for about $4 million,” one scouting director says. “Dominating at the college level made it clear he’s a future superstar. He made himself some money in my opinion.”

Encarnacion has developed into one of the most sought after players in all of baseball, and it’s in large part because of an American policy on foreign college students that seemed impossible even four years ago. It’s clear someone has indeed made America great again, and that man is Bernie Sanders.