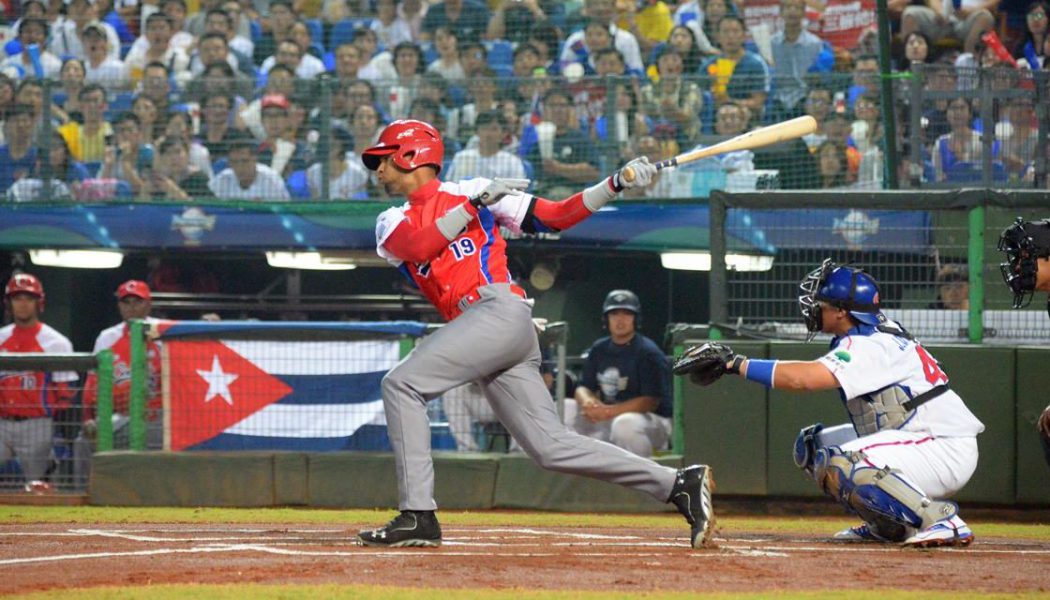 Just before dawn, Lucio “Cranky” Aguilar awakens to the all-too-common obnoxious screeching of his alarm clock. While awaking before dawn is nothing new to Aguilar, he’s not getting up for an early morning workout today. The date is November 15, 2031, and Cranky has an early morning flight to the United States, to meet with his agent for a few days prior to the the beginning of the CBL free agency period on November 18.

Years ago, Aguilar would’ve been forced to try and defect from the island, forced to gain citizenship in a more US friendly country. The risks involved and the time necessary to clear a Cuban refugee for professional baseball in the United States, however, led to an agreement years ago that allowed Cuban players to become free agents at a certain point.

After starring in the Cuban professional league for nearly a decade, everyone agreed that there was nothing left for Aguilar to accomplish in his native country. He’d be granted his free agency, no strings attached, making him free to sign with any CBL team. Aguilar is one of the most highly regarded free agents in CBL history, and sources believe he could receive the largest contract in the history of the league by the time he signs his name to paper.

A true five-tool superstar, the 27-year-old right handed center fielder has the athleticism to learn every position but catcher, according to several different scouts.

“He’s the best baseball player I’ve ever scouted out of Cuba,” one long-time US-based scout tells me. “He’s an elite hitter. He might steal 40 bases. He should be an above average defender in center, and would be truly elite in a corner. He’s athletic enough to play the infield also, but at the price he’s going to cost, I would expect teams to play him at his best position, which at this point is center field.”

Aguilar’s free agency couldn’t have come at a better time for himself. There are not a lot of star-level center fielders, and several teams have a plethora of cash to spend this off-season. The combination of positional scarcity and economic prosperity should create a massive bidding war, with some estimating “Cranky” will receive more than $50MM PER SEASON. After making just $7,500 last season, Aguilar’s life is bound to change.

As the plane descends into its Los Angeles airport runway, a small contingent of different fan bases have gathered near the luggage carousel, hoping to catch a glimpse of the Cuban standout. A giant banner adorns the dull entranceway, beautifully designed in California Dreamers colors.

“Come play for the Champs,” the banner reads, with a Dreamers logo impossible to miss in the center of the banner. “You’re already here!”

Contingents from the other west coast teams could also be seen and heard. A group of young San Diego Surf Dawg fans was openly dreaming about an outfield of the two most famous Cuban players, pairing Cranky with the always spectacular Ernesto Encarnacion.

The newly rebranded Las Vegas Aces have fans dreaming of an early Christmas present, and one fan holds a sign that reads “The Las Vegas Aguilars.”

A few Admirals fans tell me they think Aguilar makes perfect sense for their GM to target, because standout outfielders Jose Arvizu and Justin Williams are both in the final years of their contracts and are in the middle of the unfortunate aging process.

Of course, as dedicated as these fan bases are, they have no say in who ultimately makes a run at the Cuban superstar. Nearly every team in the league is likely to inquire on the standout, but we’ll have to wait and see who’s willing to pay Cranky the money that will be required. CBL sources insist not to overlook Vancouver, as they are desperate to add a star to build around with long-time franchise stalwarts like Griffin Keller and Ronnie Sellers nearing the end of the line.

“He’s going to get $50MM a year,” one rival agent insisted to me. “Just watch. People are going to lose their shit.”

Despite all the positive hype and the insane amount of talent Aguilar possesses, not all scouts are sold that Aguilar will excel in the world’s best baseball league.

“He’s going to be a good player; I think that’s very clear,” one HL executive tells me. “But at the money he’s going to cost? I mean, if you’re paying him $50MM a year, how much does he need to produce to make that a wise investment? Does he need to have a 5 WAR season? 7? 10? A 5-time MVP? I just think the price is going to prove to be far too high. Especially since he’s a right handed hitter. We won’t be bidding.”

Despite the high cost to land him and the risks, there’s no doubt that teams will be lining up to bring in the newest Cuban sensation, and he will be a CBL standout next season. Now we will just wait to find out where and for how much.