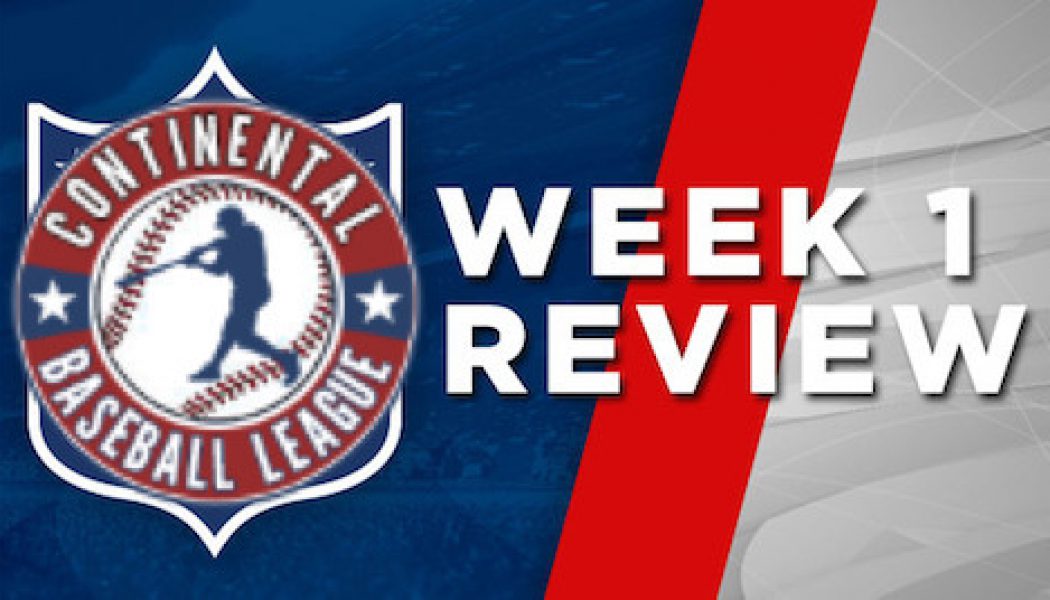 [Author’s Note: I will try to do one of these every Saturday night or Sunday morning for the regular season. It won’t be quite a month every time, so it’s not exactly a monthly review, but close enough.]

With the weather finally warming up a bit as we head into May, let’s take a look at some of the interesting parts of April.

Kings of the Castle

The Philadelphia Liberty and Vancouver Canadians have dominated their respective leagues to this point, with the Liberty posting a ridiculous 20-5 record thus far and the Canadians an even better 21-4.

The Liberty have scored 151 runs in those 25 games, an average of more than 6 runs per game. Long-time standout Don Smith continues to rake year after year, and is off to a .329/.468/.740 start with 9 home runs. 27-year-old Jon Channon has been even better, hitting .412/.459/.722 with 8 home runs. While it seems unlikely these two will hit this well all season, they are great players and should remain standouts all season. Bernardo Perez is hitting .347 and Wes Hines has a 1.72 ERA in 5 starts to anchor the pitching staff. With a league best 2.61 bullpen ERA to go along with their currently insane offense, it’s no surprise this team is 20-5 and has won 10 in a row.

The Canadians are third in runs scored and second in runs allowed, so while not quite as dominant in those categories as the Liberty have been, the 21-4 record speaks for itself. A combination of new and old in Vancouver has sprung them to the top of the league with long-time great Griffin Keller turning back the clock. He’s hit .326/.426/.609 with 6 home runs to this point. The great Sergio Rodriguez is hitting .274/.426/.534, and 25-year-old Jose Noriega may be breaking out as he’s hitting .340 in 22 games in a part time role. 25-year-old second baseman Manny Hernandez continued to improve, hitting an impressive .313/.352/.626 with 10 home runs.

Of course, there’s no denying that the addition of the fifty million dollar man has made a huge difference. Lucio Aguilar, also known as the Cuban Missile who signed for $264 million this off-season, is hitting .344/.386/.688 with 8 home runs. His defense has been a bit below expectations, but who really cares as long as he continues to hit at this pace?

The starting rotation has been great, and while a few of the veterans seem likely to decline as the season goes on, pitchers like Rick Sanchez (3-0, 3.07 ERA in 5 starts) and Cris Varela (3-0, 2.70 ERA in 5 starts) are young enough that they could continue to improve. Christopher Machamer is the latest reclamation project in Vancouver, as the highly rated closer has turned his career around after two poor seasons. He’s posted a 1.15 ERA with 12 saves in 15 games so far, and while his 11 walks to just 13 strikeouts are worrisome, he continues to do his job on a nightly basis. It should be interesting to see see how this staff holds up over the course of the season.

Unfortunately, the first month is full of hope until one of your best players suffers a crushing injury. Earning honorable mention this month was a Minneapolis Millers minor league prospect, 18-year-old pitcher Jose Rojas suffered a herniated disc in his back after showing off on his motorcycle. The Millers are expected to punish Rojas internally.

Why: Manchester center fielder Jose Ramirez, hitting .417 through 25 games, has gotten a hit in all but 1 game thus far. He went 0-3 against Austin on April 8. He’s killing CBL pitching.

Why: Michael Jordan‘s current projected WAR by season’s end. The 15.2 number would shatter the current record of 9.6, set by Ernesto Encarnacion in 2030. The league’s best all-around player, Jordan has taken his game to another level this year. He’s hitting .376/.426/.762 with 11 home runs, and he continues to be the best defensive center field we’ve ever seen in the CBL, as he’s posted a 4.0 zone rating in just 25 games. His 2.3 WAR in the month of April would have placed him in the top 100 players in the league for an entire season last year.

Why: How many strikeouts Philadelphia Liberty starter Tomas Nunez is averaging per walk this year. His 42 strikeouts to just 2 walks is amazing, and his 4.06 ERA should drop very quickly if he continues those ridiculous ratios. He has 34 strikeouts and 0 walks over his last 4 starts. After being robbed of the Bob Feller award last season, Nunez is showing he’s going to be around for quite a while.

What to Watch Next Month?

Let us know in the comments what you will be paying attention to this month. Feel free to send suggestions to me in Slack for players to watch/things to write about, I’m sure I missed plenty from this past week.